What I did to say goodbye to Berlin 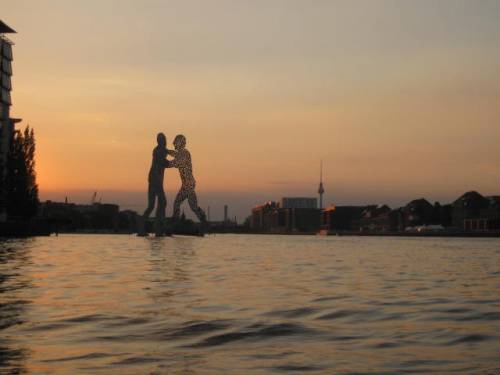 I
I visited Silver Future again, the queer bar of my dreams (at least apart from its somewhat mind-boggling anti-anti-zionist policy). On my final visit, I got drunk and cried, but I guess that was kind of inevitable. But I also managed to distract myself for a little while by crushing out on the cute bartender. I thought about my heartbroken friend visiting in June, and how she’d regularly report: I think I am actually having fun! Hey, I am finding people attractive! And then she’d follow it up with: No, no, I think that was just a false epiphany. I thought about how curious it is that we have to analyse all our symptoms. I thought about how we had drank Prosecco outside Silver Future and I had written her a two-page list of compelling reasons why she shouldn’t contact her ex.

II
I went to see a film by a director I kissed last year. When the credits rolled I realised I’d kissed the assistant producer as well. I was no longer distracted by an impossible crush on the director, so I was able to enjoy the film by itself, and somehow its wistful tone made me feel better afterwards, not worse.

III
I returned to the shisha bar around the corner from my flat, but I didn’t see the friendly Syrian woman who’d been working there, who’d sat next to me and smoked cigarettes and persevered in talking to me even with my rubbish German while we’d watched Germany losing to Spain. I didn’t see the other staff I’d encountered before, either. This time, nobody brought free bowls of crisps and peanuts and plates of watermelon. There was no wine available; I’d seemingly been the only person who’d ever ordered it. But I drank coconut-strawberry alcohol-free cocktails. The atmosphere was still nice, but now it felt unremarkable.

IV
I visited the old-school German pub on the corner of my street. I had never set foot in it before; nobody else had really expressed interest in checking it out. I was already drunk from Silver Future. For some reason, I played electronic darts, most of which ended up on the floor. I met somebody from Italy and two people from Spain and I talked to them in Spanish which Nick didn’t understand so the next day when I couldn’t remember what we’d talked about he was unable to advise. The bartender was from Macedonia and when we returned two nights later he was playing cards with the regulars. The bar stayed open till three something and then he made sleepy faces at us and we gratefully paid and left.

V
With Jo and Nick, I rented a pedal boat on the River Spree. It is impossible to mope in a pedal boat. We pedalled out to the Molecule Man sculpture as the sun began to set, and returned the boat late, paying a penalty. It was worth it.

VI
I visited the Stasi Museum. The exhibits were in German, with only partial explanations in English, and nothing in other languages. I wanted to know more, especially the story of the young female punk. But it was interesting nonetheless, and moving, and exciting to see the place in history of punks and anarchists and environmentalists.

VII
I visited the Reichstag after sunset and looked out across this city which I hadn’t seen enough of, hadn’t gotten to the core of. In some ways that made it easier not to miss. In other ways … I tried to avoid regrets.

VIII
I visited the 1939-1945 War Cemetery to find my grandfather’s headstone. I was the first member of my family to visit it. I took pictures for my dad, who had strategically avoided actually saying no when I’d invited him to visit me in Berlin, but who didn’t want, it seemed clear, to visit the country where his father had died. I thought about the grandfather I never knew, and my dad as a nine-year-old boy learning that he wasn’t coming home, and his mother, a cool lady by all accounts, the namesake I never met, learning that she had lost her love on Valentine’s Day. I sat on the grass in front of the stone and cried, surprising myself in the process. The majority of the hundreds of headstones were for men who had died in their twenties, row after row of them, with heartbreaking inscriptions.

X
I stood on the balcony and looked out for the last time. And then I left.

And after leaving Berlin, the first thing I missed, somehow, was the recorded announcement, still echoing in my head: Zurückbleiben, bitte.

This entry was posted in Uncategorized and tagged berlin, family, image dump. Bookmark the permalink.

3 responses to “What I did to say goodbye to Berlin”